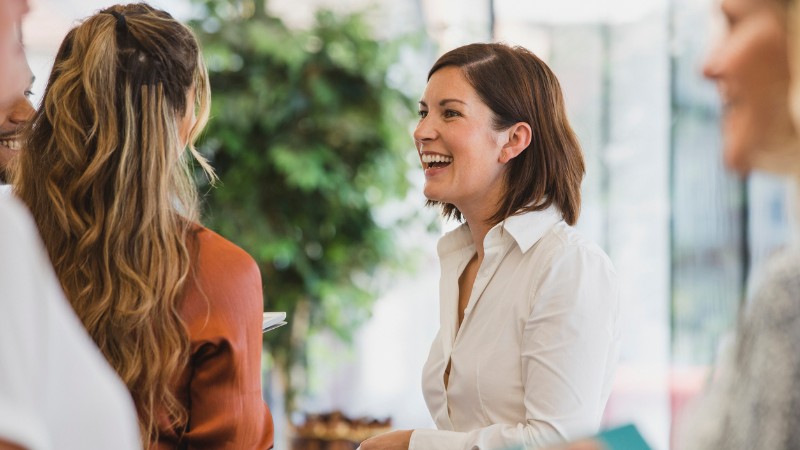 Just over a year on from the market lows in March 2020, it’s perhaps appropriate to stand back and question what comes next. We seem to be in foothills of what might be a synchronised global economic recovery. Notwithstanding the terrible cost of the pandemic to human life – and the adverse effects on employment, economies and business models – consumer and corporate balance sheets are, in aggregate, healthy.

We possibly have several years of GDP recovery and growth ahead, attended by rising corporate profits. But with all assets having rallied so hard from the lows this time last year, where are the opportunities? And where are the threats? Here are five of the big questions that are being asked by investors.

1. Vaccine setbacks or new COVID variants could pose a systemic risk to the recovery

The vaccine discovery and roll-out has been a great success, but as obvious as it sounds, we mustn’t forget that any new variant which is not immune to the existing vaccines would set back plans for the global economic recovery. So much of everyone’s outlook is centred around a return to ‘normal’ that the effect on optimism of a new COVID threat – both at the individual and corporate level – would be devastating.

Similarly, and as we are already seeing, issues with vaccine supply could cause a more uneven global recovery from the pandemic. This is of particular importance to the Eurozone as so many of its countries rely heavily on tourism. However, minus the coronavirus risks, the European equity market looks to be one of the more attractive on most valuation metrics.

For all its current travails, the Eurozone has one of the better fiscal positions. Money supply data would suggest Purchasing Managers’ Indices (PMIs) are likely to trend higher from here – and these are typically big drivers of cyclical shares. This bodes well when considering the underlying constituents of the equity market in the Eurozone.

2. With economies recovering quickly, interest rates might rise too slowly

Like many investors, we at Artemis have been talking a lot about the risk of inflation returning and what this means for interest rates. It’s pretty much a given that most market participants believe we are in a reflationary period for the global economy. But their concern is that the central banks are underestimating how strong and persistent inflation could become. The Federal Reserve (Fed) in particular is being tested. Chairman Jerome Powell’s recent statements are yet to convince market participants, who worry that the Fed may fall behind the curve.

Joe Biden’s $1.9 trillion stimulus package adds to these concerns but it’s worth analysing this a little more. Around $750bn of the package will be used to help facilitate mass inoculations, so is unlikely to be inflationary. Just over $1 trillion will be income subsidies for households – a direct benefit to consumers over the next six months. But if these consumers behave rationally, they may not splurge as much as commonly assumed. The subsidy will have a similar effect to a tax cut. And when a tax cut is temporary, consumers or businesses often bank the income rather than spending it.

3. Central Banks are walking a tightrope – interest rates might rise too quickly

The converse risk is that rates might be increased too prematurely or too rapidly. This is a lesser concern at this juncture. But if the current economic recovery is akin to a ‘sugar rush’, what happens if the fulfilment of pent-up demand persists for longer than policymakers expect?  What could this mean for equities and bonds?

For equities, the answer is nuanced. This chart shows that rising inflation is good for P/E multiples – at least up to a point.

Rising inflation is good for P/E until inflation exceeds 3% 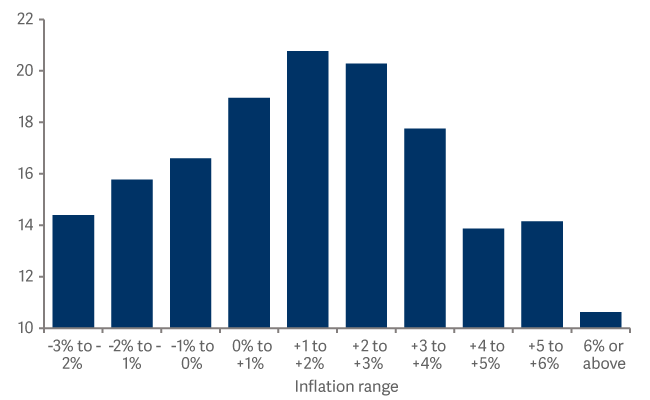 Or put another way, inflation forwards are typically positively correlated with stocks. As the chart indicates, it is only above 3% inflation that equities stop performing well. So the risk that inflation causes rates to rise too quickly may not be too bad for equities. It could create a near-term buying opportunity, with certain sectors which are known to do well in an environment of rising rates – for example banks, diversified financials, autos and mining stocks.

For bonds, however, the answer is unambiguous. The correlation between the 10-year treasury yields and the Fed funds rate is obvious and this means that bonds will fall. It might be of little comfort, but our managers have pointed out that at least this scenario would lead to an orderly sell-off in fixed income. If rates rise too slowly and central banks are perceived to be behind the curve, the reaction of bond markets will likely be anything but orderly.

Linked to – but also separate from – the second and third risks is that of whether the dollar will decline further.

There has been some stabilisation and indeed a modest recovery year-to-date for the dollar versus a basket of currencies. But from its highs a year ago, the dollar index is down about 10%.

More fundamentally, a key reason for this weakness is the immense amount of debt issued by the US government. Net external debt is currently 66% of US GDP, which is more than double the level in the immediate aftermath of the Global Financial Crisis. In total, government debt-to-GDP in the US is about 130%. According to the International Monetary Fund (IMF), this will rise to about 145% this year compared to just over 100% in the EU. With more debt relative to the EU and greater debt issuance relative to the Eurozone also likely, it stands to reason that the dollar has been weak versus the euro. Indeed Purchasing Power Parity data would suggest that the dollar is about 20% overvalued relative to the euro.

Typically, a declining dollar is good for global growth given its status as the currency of global trade. Typically as well, a falling dollar leads to rising inflationary expectations and rising commodity prices. Historically too, equities do better more generally in a weaker USD environment, as this next table shows.

On average when the dollar is declining, global equities rise nearly three-quarters of the time. More than that, most emerging market regions typically outperform in US dollar terms as their currencies strengthen against the greenback.

But beyond emerging markets, even developed markets benefit from the weakening dollar. 60% of Japan’s Nikkei earnings are domestic, as measured by sales. In Europe, less than a third of the revenues of Germany’s DAX index are domestic, and less than half are European. For the FTSE 100, only a fifth of the index’s revenues are from the UK. It’s about a half that for the FTSE250 but still a lot lower than the domestic focus of US indices.

So if we are in for a period of dollar weakness, it’s probably good for global equities in aggregate and especially for European and UK equities.

As a key powerhouse of global economic growth – and the only driver of global growth in 2020 – a slowdown in China could have significant ramifications.

This chart shows that China was responsible for 36% of global growth in the period 2015 to 2019, when measured in real terms. 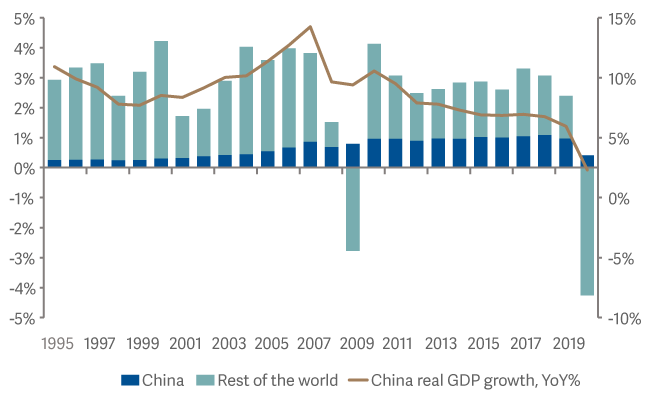 Source: Credit Suisse. Data shows the percentage contribution to Global real GDP growth, on a purchasing power parity-adjusted basis, of China and the rest of the world (LHS). Real year-on-year GDP growth is shown on the right hand side.

But some of China’s domestic forces of growth could be about to subside. Money growth has been supportive to date, but stated policy is to tighten. Purchasing Manager Indices are softening, albeit they are still above 50 so in expansionary territory.  And unlike Western economies, there has been very little fiscal stimulus in China. This may become a challenge if industrial production and retail sales growth have peaked.

This all said, the benign inflation and backdrop and fiscal headroom makes China attractive – especially after recent weakness in markets. Dislocations in valuations appear to be more extreme in China than elsewhere in the world – and this is a great opportunity for the stock picker. 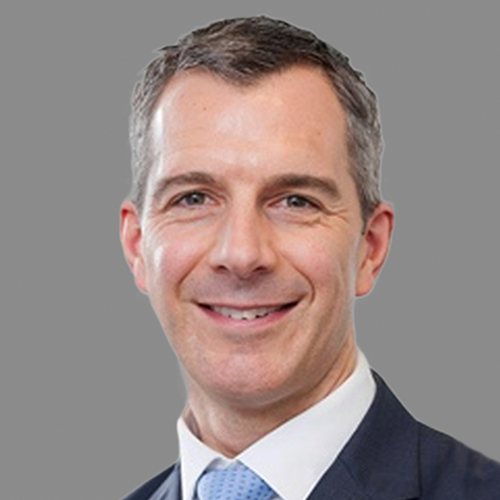 Aegon isn’t responsible for the content and accuracy of investment articles provided by third party asset managers. We might not share the views of the author and organisation.

Capital at risk. This content has been prepared for professional investors only. All financial investments involve taking risk which means investors may not get back the amount initially invested. This article was first published by Artemis on April 7 2021.

Any research and analysis in this communication has been obtained by Artemis for its own use. Although this communication is based on sources of information that Artemis believes to be reliable, no guarantee is given as to its accuracy or completeness.

Any forward-looking statements are based on Artemis’ current expectations and projections and are subject to change without notice.

Third parties (including FTSE and Morningstar) whose data may be included in this document do not accept any liability for errors or omissions. For information, visit artemisfunds.com/third-party-data.

Issued by Artemis Fund Managers Ltd which is authorised and regulated by the Financial Conduct Authority.