Anti-aging: The secret to enjoying a long life 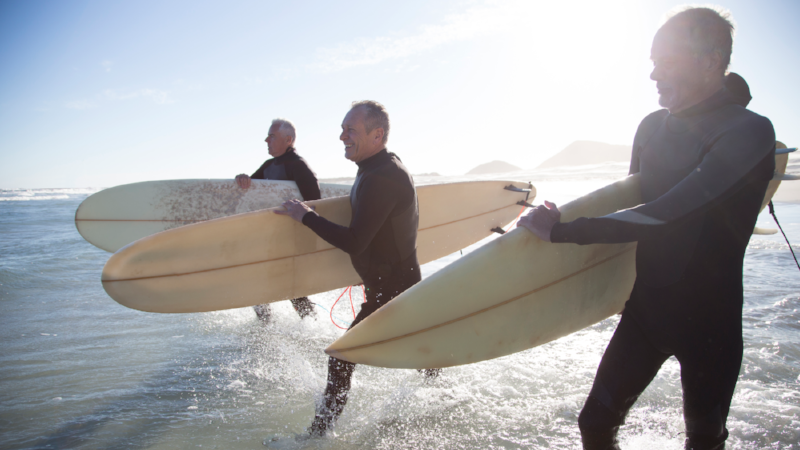 Three years ago, Carl Honoré, the journalist whose series of books, starting with In Praise of Slow in 2004, has made him the guru of slow living, had an epiphany. Like a true Canadian, though one born in Scotland and domiciled in London, he adores ice hockey, and still plays hard and fast at the age of 51. But one day, at a tournament in Gateshead, someone pointed out that he was the oldest player among the 240 competitors. “I knew that I was one of the oldest, but being told in such raw terms that I was the oldest – it just shook me. It knocked me for six in a way that shocked me.”

Honoré was 48 at the time, “the big 50” was looming, and what he calls “the terrible weight of the number” started dragging him down. Was ageing really going to be as bad as everyone said? Was all he had to look forward to now decline, decrepitude and death? On the train back to London, as his team-mates knocked back the beers, he decided to embark on a book on the subject.

“I’ve found with all my books that they start with what is almost an out-of-body experience when I see myself in sharp relief from the side,” he tells me. “I needed to understand my own relationship with the number, with what ageing means, and where I was going to be in 10 or 20 years.” The result is B(older): Making the Most of Our Longer Lives – a call for society to become less ageist and for individuals to stop worrying about the process of ageing and wring every drop out of whatever time is allotted to us.

Honoré has travelled the world in search of active, high-achieving older people, but he stresses that he doesn’t want to hold the “outliers” up as the norm. He is more interested in a state of mind in which the average 70- and 80-year-old goes on working if they want to, volunteering, starting their own enterprises, playing competitive sport, having great sex – and society doesn’t bat an eye. It is ageist, he argues, to stop people being able to do those things; but it’s also ageist to make a big deal of it. Still having sex at 80, still making TV programmes at 90, even running marathons at 100? Why shouldn’t they be?

The conclusion Honoré came to, after three years of research and an examination of the way older people are treated around the world, was that it was in many ways a golden age for “the old” (a term he would never use): there were more of them, they were healthier, more active and many were better off than in previous generations. They could no longer be ignored or marginalised. But, in his view, that is just a beginning. “It can be so much better,” he says, “if we move a lot of goalposts and change the way everything from healthcare to politics to the business world to education is organised.” He argues that the idea of being educated between the ages of five and 21, working for 40 years and then retiring on a pension at 60 is completely out of date, imagining a much more fluid way of life where we dip in and out of education and the job market and never formally “retire”.

I ask Honoré at what age we become “old”. He refuses to supply a number. “I use the word ‘older’ in a very elastic way,” he says. “The definition is so fluid, and to box people in and say: ‘This is old’ narrows horizons. What do we gain by saying: ‘This person is old’?” He believes ageism is lessening but remains endemic. In fact, he says that when he began the book he was one of its worst proponents. “When I was younger, I was so ageist. I had a dread of growing old. I had bought into that idea that you hit 35 and it’s just a downward spiral. I used to think of old people as just sad and cantankerous. But, if you look at the stats, the people with the highest levels of happiness and life satisfaction in Britain are the over-60s. That doesn’t take away from the fact that many people will be very unhappy, but the story we are told and that we tell ourselves is that everyone is unhappy. It’s always the worst-case scenario: that’s what we are contaminated by.”

Honoré no longer frets about ageing. “My biggest worry was that I would end up in a gloomy place,” he says, “but, thankfully, the opposite is true – I feel so much more optimistic now than I did when I embarked on the book. We have created a culture where ageing is seen as a chamber of horrors. There is no chink of light in it. I suspected that was not true, and along the way I found it to be utterly untrue.”

B(older): Making the Most of Our Longer Lives is published by Simon & Schuster (£16.99)

1. If you think of yourself as old, you will be old. The media will bang on about dementia and loneliness, but ignore them. Concentrate on the upside.

2. Take yourself out of your comfort zone. Resist being pigeonholed; keep experimenting; challenge yourself and society’s stereotyping of you.

3. Try to stay healthy. Eat well and take lots of exercise – it’s good for brain and body. Exercise doesn’t have to mean playing competitive ice hockey; the odd brisk walk will keep you in shape.

4. Look for positive role models. Helen Mirren, David Attenborough and, best of all, Michelangelo, who lived until the ripe old age (in 16th-century terms) of 88 and spent the final 20 years of his life designing and overseeing the construction of St Peter’s Basilica in Rome. Now that’s a way to go out.

5. Seek to become the person you always wanted to be. One reason many people are at their happiest in their 60s is that they feel freer and less beholden to others. They contain all their previous selves and can start to make sense of them.

6. Don’t just maintain social connections with your own age group: mix across the generations as much as you can. Inter-generational contact has become increasingly difficult, but if we can do it we benefit – and society benefits.

7. Be willing to let stuff go. If that friendship isn’t working, drop it. Streamline your life. There is less time left, so make it count.

8. Ageing should be a process of opening rather than closing doors. “We will lose some things – speed, stamina, a bit of mental agility – but in many other respects we gain,” says Honoré. We learn new skills, have greater social awareness, are likely to be more altruistic, are “lighter” in our approach to life – because we are less hung up on creating a good impression – and can see the bigger picture. It may be that we are in a position to make a greater contribution to society in our 60s and 70s than in our so-called prime.

9. Honesty is the best policy. Don’t try to pretend you are not 75 or 85 or whatever age you are. “As soon as we start lying about our age, we’re giving the number a terrible power – a power it doesn’t deserve,” says Honoré. People do it because there are so many ageist assumptions attached to age, but the way to fight back is to subvert those assumptions.

10. Society tells us that sex, love and romance belong to the young, but it’s not true. Plenty of older people continue to experience the joy of sex. But there are no rules: have as much – or as little – as you want. Some older people see it as a blessed release to escape the shackles of falling in love (and lust), but others can’t imagine life without it. Whatever turns you on.

11. Ignore people who say you can’t teach an old dog new tricks. You can. Despite the common perception that creativity is the preserve of the young, we can get more creative as we get older. Our neural networks loosen up and we have the confidence and freedom to challenge groupthink. Honoré was encouraged last year when the Turner prize abolished its age limit for artists. Michelangelo could have been a contender.

12. Don’t pretend death isn’t coming. Embrace it – just not yet. “It’s useful to know our lives are bookended,” says Honoré. “When time is running out, it becomes more precious. It gives life shape and, in some ways, meaning.” Don’t dwell morbidly on it, but don’t shy away from it either. The closer you get to it, the less you are likely to fear it and the greater your focus will be on the things that really matter.

This article was written by Stephen Moss from The Guardian and was legally licensed through the NewsCred publisher network. Please direct all licensing questions to legal@newscred.com.