An update on the lifetime allowance 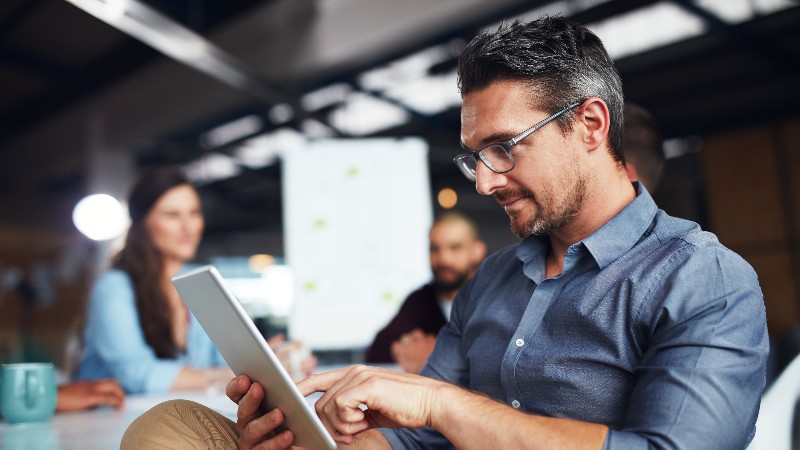 This communication is for intermediaries only. It must not be distributed to, or relied on by, customers.

The standard lifetime allowance (SLA) is a limit on the amount of pension benefits that can be paid to, or for, an individual – including lump sums and retirement income – without triggering an additional tax charge. In this article we’ll take a look at what the recent announcements could mean for your clients.

Since 6 April 2018, the base-level SLA has increased on an annual basis. This was in line with the percentage increase in the Consumer Prices Index (CPI) over the year ending in the September – immediately before the beginning of the tax year in question, with an element of rounding up.

While previous yearly increases to the base-level SLA had appeared to be token amounts, all rises were widely welcomed after a series of reductions from April 2012, with complex transitional rules introduced each time to protect existing benefits. With the SLA now being frozen to 5 April 2026 many more clients will find themselves affected by the SLA.

This presents a wide range of planning issues for those who could be affected in future, or are already impacted – take a look at the following examples:

Working out who could be affected in future becomes clearer as time goes on and the exact level of the SLA is known. Much depends on the client’s current pension savings, any previous benefit crystallisations and (for funds in defined contribution schemes) the rate of investment growth they’re likely to achieve in the time period before benefits are to be taken.

The figures in the table illustrate the current level of pension savings that may possibly be at risk of breaching the SLA in the future when benefits are taken in full. The figures are based on no further contributions being made. They assume that the SLA will start to increase again from 6 April 2026 in line with CPI increases at the Government’s inflationary target rate of 2% per annum. 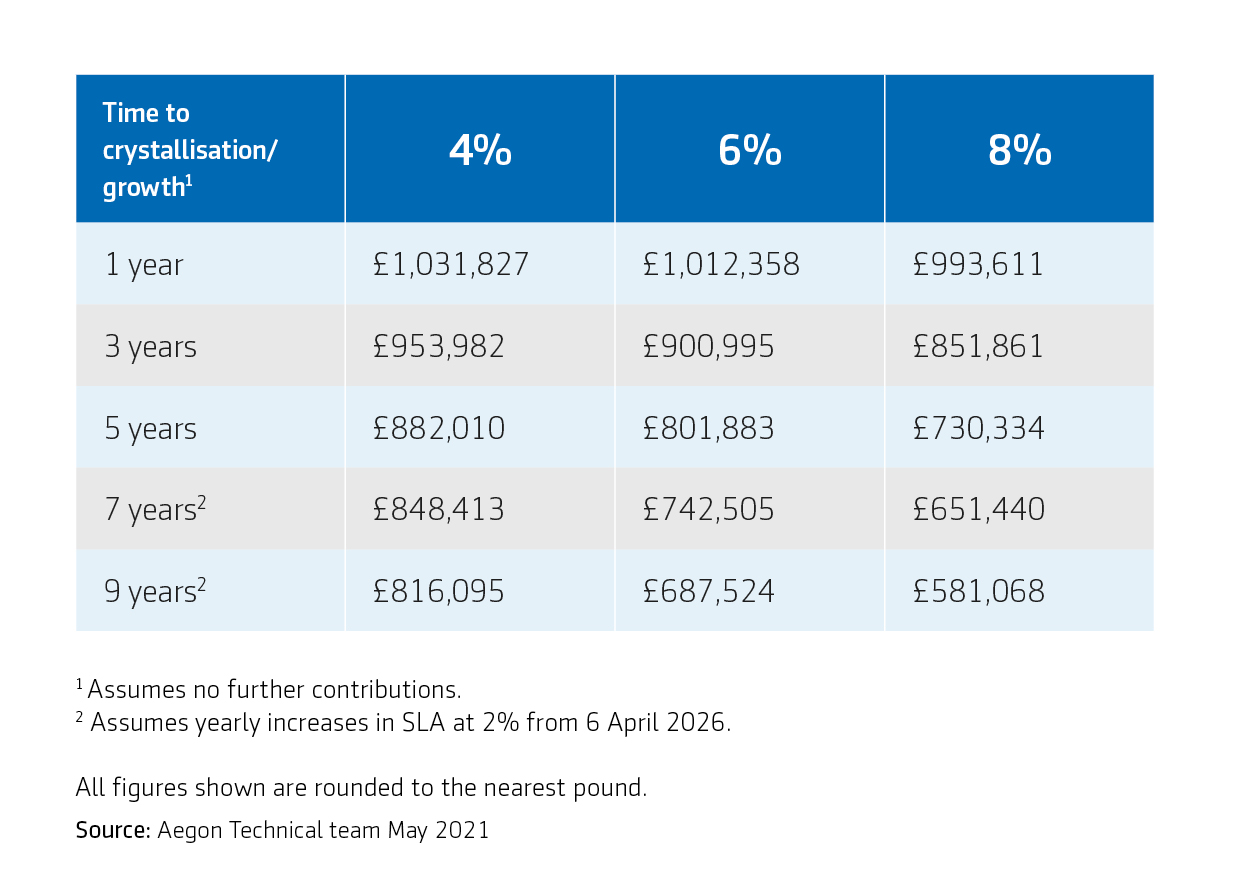 The question is, would these levels of current pension savings, assumed growth rates and time periods encourage clients to stop making pension contributions?

In my view, probably not. Personal contributions to a registered scheme are very attractive for tax planning purposes, minimising tax payable and protecting certain benefits and allowances. There might be no alternative form of compensation offered by an employer for stopping employer contributions.

Also, the client will benefit from tax-advantaged growth and privileged IHT treatment in the meantime. Nine years is a long time in pensions – who can predict what the pension rules will be by the time we get to 2030? However, the position does need to be actively monitored as there may come a time when a client’s pension savings reach such a level that alternative forms of saving could be more appropriate.

With seven different forms of SLA protection currently in existence, it’s easy to see why there’s confusion on these rules. It’s vital to have a clear understanding of these provisions as the risks of not registering for protection when eligible, or in losing existing protection, can be very serious.

Our fund protection summary table summarises, compares and contrasts the main features of the full range of protections available since 6 April 2006.

With no registration deadline for FP16 or IP16 it’s still not too late for clients to apply for protection. If eligible, registration can be done online.

Clients who’ve already registered for FP16 will be unaffected by the announcement to freeze the SLA. They’ll only be impacted in future once the yearly increases re-start and cumulatively take the base-level SLA above £1.25 million.

Those with existing IP16 will only be affected if their own protected amount is overtaken by the base-level SLA, at which point the protection falls away. This had already happened for some clients due to the previous increases in the base-level SLA, but will stop for the time being and existing IP16 protected amounts will continue to apply meantime.

Previously, clients who intended to take benefits towards the end of a tax year, and who might be affected by the SLA now or in the future, would consider holding off taking benefits until after 5 April – when any increase to the SLA would take effect.

This then allowed any subsequent benefit crystallisation to use up a lower percentage of the increased SLA than it would if taken before the end of the tax year. This may have meant a possible tax charge could be reduced or avoided.

This tax planning strategy will not be relevant while the SLA remains fixed.

Equally, for some clients, delaying taking benefits until after 5 April previously meant that a higher tax-free lump sum may be available, as the maximum 25% PCLS would apply against any higher base-level SLA applying from the start of the new tax year.

This tax planning strategy will not be relevant while the SLA remains fixed. Unless protected, the maximum PCLS available will remain set at £268,275 for the next five tax years.

Clients who’ve crystallised their pension benefits and have already exhausted their full SLA will be unaffected by the freezing of the base-level SLA. If they’ve zero percent remaining, it doesn’t matter if the base-level SLA remains fixed or increases (unless more fundamental changes to the pension rules are made).

Having said that, many of these clients will still need help in taking any remaining pension benefits in the most tax efficient manner, protecting their overall wealth and inheritance tax planning.

For clients with uncrystallised pension funds that are, or will inevitably be over their SLA at some point, there are a number of different strategies available to mitigate the SLA charge.

Clients that are currently able (and who need) to take benefits will want to know if they should crystallise benefits in full and pay the SLA charge up front, or take only part of their benefits. For example up to their available amount only, and delay any SLA charge until later – possibly as late as age 75.

If benefits are to be taken in full now, clients will need to know if it’s in their best interests to take any amounts over the SLA by way of a lump sum or taxable income.

Depending on the circumstances it might be possible for those affected by the SLA to make use of the small pots lump sum provisions. For example by using multiple arrangements in a receiving scheme for any new transfers, to reduce any prospective SLA charge payable. Care needs to be taken not to jeopardise any existing enhanced or fixed protection inadvertently in the process.

Clients also need to remember that if they die before age 75 the value of their uncrystallised funds will be tested against their available SLA and that tax charges will apply to their beneficiaries on any excess benefits, depending on how they’re taken.

There could be an opportunity for the beneficiaries to take benefits from any uncrystallised funds that are over the SLA as income, rather than a lump sum, to reduce the overall tax payable from the funds left to them.

With the SLA being frozen until 5 April 2026, many more clients (and their beneficiaries) are likely to see death benefits being affected. For those who are or may be affected by the SLA – there could be an opportunity to consider other methods of providing life cover outside of the registered pension scheme environment. For example, under the relevant life provisions, for maximum tax efficiency.

We’ll continue to keep you updated on the SLA as and when legislation changes to help you in providing appropriate guidance to your clients.